From Granada to Almuñécar

There are frequent buses directly between Almuñécar and Granada, and some from the Airport as well.   There are more options if you can take a bus from the airport to the main bus station in Granada. The price is roughly about 8 euros each way, depending on the class of bus and route you select.

Traveling from the Granada Airport to Almuñécar :
If you miss the Alsa bus and need to make a connection through the central bus station, this is the most common bus service used from Granada Airport.  It is operated by a company known as Autocares José González.  From Granada Airport, the buses depart after each arrival flight, from outside the arrivals hall.

The price of the journey is 3 Euros, and bus tickets are available for purchase from the bus driver. Inquiries relating to the bus service can be made at the information desk found within the terminal, where there is a sign that lists the schedules of the bus services.  Keep in mind that bus schedules are sometimes changed due to flight times.

It is about 75-90 minutes by public bus from Almuñécar To Granada bus terminal.  Please allow time to travel within the city to your destination.  You would depart Almuñécar  from the central bus station.  You may purchase tickets within the station or you can book now in advance.
Click here for timetables and prices for buses.

Going to visit the Alhambra?

Make sure you get advance tickets to the Alhambra Palace before you go.  To get there, just use the bus directions above for transport from Almuñécar To Granada bus station.   From there you have a couple of options via public transportation.

The timetables below are examples at the time of writing.  Please check the website for the current route and pricing information.

You may buy your bus tickets online now!

There are several options from the shared shuttle to private car services offered through Shuttle Direct. Click here to find the best deals on your transportation from Granada. By Car  – Self Drive

If you have more time and you don’t like motorways there is an incredibly picturesque road from Almuñecar to Granada.

Follow the signs from the center of Almuñecar to Otivar or Jete.  If you go this way it will take about 90 minutes.  There are lots of tight bends, the views are spectacular. 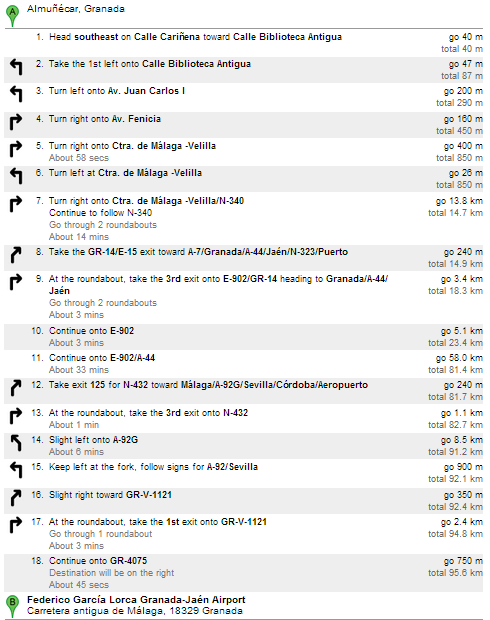 Information about Driving in Spain

How To Get From Malaga To Almuñécar

9 Useful Tips For A Car Hire In Spain

How To Figure Out Parking in Almuñécar

Driving in Spain – Everything you need to know and more!